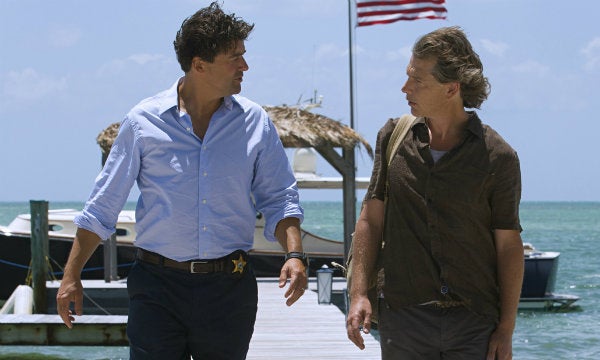 Australian actor Ben Mendelsohn is typically portrayed as a villain or a criminal and this is the case once again in the new hit TV series Bloodline.

In arguably one of his best performances to date, Mendelsohn plays the character of Danny Rayburn, the ‘black sheep’ of a family that seems flawless at first impression.

The show starts with the prodigal son, Danny, returning to his Florida hometown for his parents’ anniversary.

Danny, the oldest sibling in the Rayburn family, is seen as a failure in most of his family’s eyes.  Although this is how he is percieved, he is very manipulative and persuasive, always enticing his family into giving him second chances.

Mendelsohn’s character is one of the most interesting ones in the show. Him and his younger brother John Rayburn, who is played by Kyle Chandler, are the main characters in the Bloodlines TV series.  Their relationship is very complicated and also one of the most curious themes throughout the show.

Mendelsohn’s performance cannnot really be faulted, he perfects the role of a brother who has gone down the wrong path in life,  addicted to pain killers and a borderline alcoholic.

In just about every scene in the show he is seen in a scruffy outfit with a cigarette hanging out of his mouth. This is a classic image that Mendelsohn has portrayed throughout his entire acting career.

Some of the plot in the show is a bit predictable, especially towards the beginning of the season. However I thought the ending was a complete surprise leaving endless possibilities for the next season.

The show is a Netflix exclusive and with Netflix recently being released in Australia it’s a great opportunity to see one of Australia’s most talented actors in action.

Is It Safe To Fly? – Data Piece

MCG's Food Cut Seems to be Paying Off

Something ‘You’ Must Watch

From schoolgirl to celebrity: how The Voice changed Lucy Sugerman’s life

From schoolgirl to celebrity: how The Voice changed Lucy Sugerman’s life