A Small Man with a Big Heart: A Q&A with Soumil Sharma

Soumil Sharma’s young life has not been easy. Before he was even born, Soumil’s parents knew he was going to be born with a disability called pseudoachondroplasia. This disability is a form of dwarfism meaning that Soumil is a lot shorter than a regular person but does not have any intellectual deficiencies. 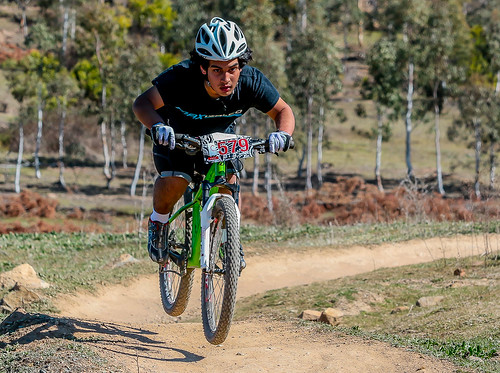 Born in the mountains of Shimla, India near the Himalayas and Nepalese border in 1999, his parents immigrated to Australia when he was only two years old. The began their Australian life in Western Sydney before relocating to Canberra when Soumil was ten years old.

After attending Dickson College and graduating in 2017, he enrolled in the University of Canberra to be part of the first cohort to study a Bachelor of Vision Science.

Standing at only 4 foot and 3 inches, the 19 year old has endured a tough upbringing. However his disability hasn’t stopped him from doing what he loves.

From a young age he excelled in both mountain biking and athletics. His mountain bikes are custom made for him, which has helped him become a podium finisher in both the Mont 24 Hour Race, Scott 24 Hour Race and the ACT School Mountain Bike Championships.

During his primary and high school days, he broke several Australian records for Shot Put, Discus and Javelin for F40 and F41 (the classification system for how tall competitors are). He’s still the current holder of these records.

I recently had an opportunity to meet with Soumil, and I was instantly amazed at what the human mind is capable of. Soumil is an incredibly positive man who clearly lives life to its fullest.

I hope you find this as interesting as I did.

Q: What sacrifices have you or your family had to make over the years?

A: There have been quite a few. Personally I had to take quite a bit of time off primary school because of the surgeries I had as a kid. My mum couldn’t work during that time even if she was highly qualified. Mainly because I had doctor/physio appointments every week and I wasn’t going to school. I had many surgeries that involved having metal pins and plates in my legs to try and straighten them out because they were bowing quite a lot. It’s mainly in the joints where I have difficulties now like in my elbows and knees where I can’t completely straighten them.

Q: Do people underestimate your ability and skills when competing in mountain biking?

A: They most certainly do. But they are nice about it and give me complements here and there especially after races. When I compete, I’m not there to make up numbers, I’m there to go as hard as possible and change the stigma that surrounds people with disabilities.

Q: Has your disability taken away any chances or opportunities that have presented themselves throughout your life so far?

A: I would like to think not, but a realistic answer is maybe. I do believe that if I was of normal stature I might have been a half decent mountain biker. Considering that most the races I have competed in I have been only been slightly off the pace when compared to my able bodied counterparts. It might mean with longer legs and a larger bike I might have been able to be decently quick. To be honest my disability has also opened doors for me as well so it’s a hard question to answer.

Q: Do you believe that there will be a time when able-bodied and disabled-bodied people will be able to equally compete in sport events?

A: People like Oscar Pistorius have proven that it is possible for disabled athletes to compete with able-bodied athletes. And with technology like prosthetics and surgery techniques getting better who knows. I do doubt people with severe disabilities would be able to but who knows? Time will tell.

Q: Has Australia done a good enough job in regards to helping people that live with a disability through the NDIS?

A: I personally believe they have. The NDIS is just one many schemes and scholarships that helps close the financial and social gap between able bodied and disabled people. It’s very hard and almost impossible to fully close the gap, the government would need an unlimited budget for that which is not viable. We also have Centrelink that can assist disabled people and their families. I have heard dealing with Centrelink is a nightmare most of the time. I am actually not eligible for any welfare payments through Centrelink so I don’t have any first hand accounts of dealing with them.

Q: Could we learn anything from other countries in how they deal with similar issues?

A: I am not sure to be honest. From what I have heard most first world countries aren’t as good as Australia when it comes to these issues. I have heard Scandinavian countries are pretty good with these things but I am unsure. I haven’t travelled to that many countries so it is a bit difficult for me to say. In India there is not a lot of accessibility for disabled people, just regular things that we take for granted here in Australia like ramps into shops or even disabled parking.

A Genderless Moment with Electra Powerhouse

Do We Really Need More Comic Book Adaptations? A Review of DC’s ‘Titans’

Being a Little Different

Special Olympics, World Games and so much more