Lynnette Dickinson is a dru yoga instructor from Canberra who suffers from Multiple Sclerosis. Lynnette’s diagnosis was a tough battle, especially when she was forced into an electric wheelchair because of her deteriorating condition. Through the practice of yoga and mindfulness meditation, Lynnette was able to turn her life around. She has since returned her wheelchair, and now teaches yoga to those who need it most.

She shared her incredible story, from the rough patches and mental health hurdles, to the journey of recovery through yoga, to the publication of her influential book. Lynnette continues to affect, influence and teach others suffering through similar circumstances, and her story is well worth the read!

Q. What has your journey been like with Multiple Sclerosis?

A. I was diagnosed with MS in 2004 in the U.K. I had been, for the previous 6 months, noticing fatigue, and some funny little neurological symptoms, like things happening with my eyes. Previous to that, I had had neurological symptoms over the years, like patches of numbness, tingles down my arms during the heat or exercise, that were very easy to just put aside.

I had the birth of one of my children in 2003 and there were lots of stressful situations in my life, so this fatigue and these extra symptoms were very easy to pass off. We moved to the UK at the beginning of 2004, and again that was accompanied by relocation stress and so on. My symptoms started getting worse at this stage, so I went to a doctor who set me up for neurological testing for my eyes, and she told me if the symptoms got any worse to go straight to hospital. I woke up one day to go work, and really didn’t feel well, so I called in sick.

By lunchtime that day, I couldn’t actually sit up.

We were in hospital, and they gave me a lumbar puncture, and they found a huge amount of protein in my spinal fluid, which is an indicator of MS. So then followed an MRI, a catscan, and they were initially concerned about a tumour, and then concerned about blood clots on my brain. Two MRI’s later, they decided that I had probable MS.

I was sent home in a wheelchair with lots of Velcro, I have since hated anything with Velcro. 6 months later I was walking again, sort of, and I came back to Australia at the beginning of 2005, and I wasn’t too bad. I had an 18-month-old child, and two elder children, and I had begun tutoring and writing from home. Progressively over the following 18 months, my condition got worse and worse.

That was what tipped me over the edge into dependence in an electric wheelchair. Up until that point, I didn’t even have the strength to get out onto my own front veranda on my own, and along with that were speech problems, digestive problems. I went into a deep depression. My GP had written on my pension application that I was expected to be in a nursing home in 5 years. And I thought, what am I going to do?

I started on anti-depressants, on the advice of a psychologist, and that was just enough to part the clouds. I started looking around at how exactly I was going to continue living.

Q. How did you find dru yoga in this time of need?

A. I had been going to a dru yoga class since I had come back from the U.K. So, I thought I would start going back in the beginning of 2007. When I went to the class, there was a leaflet for a meditation weekend, and I rang and said, “I have no idea how I’m going to do this, but I would love to come”. I got funding, and somebody offered to look after me, as I was still in my electric wheelchair. 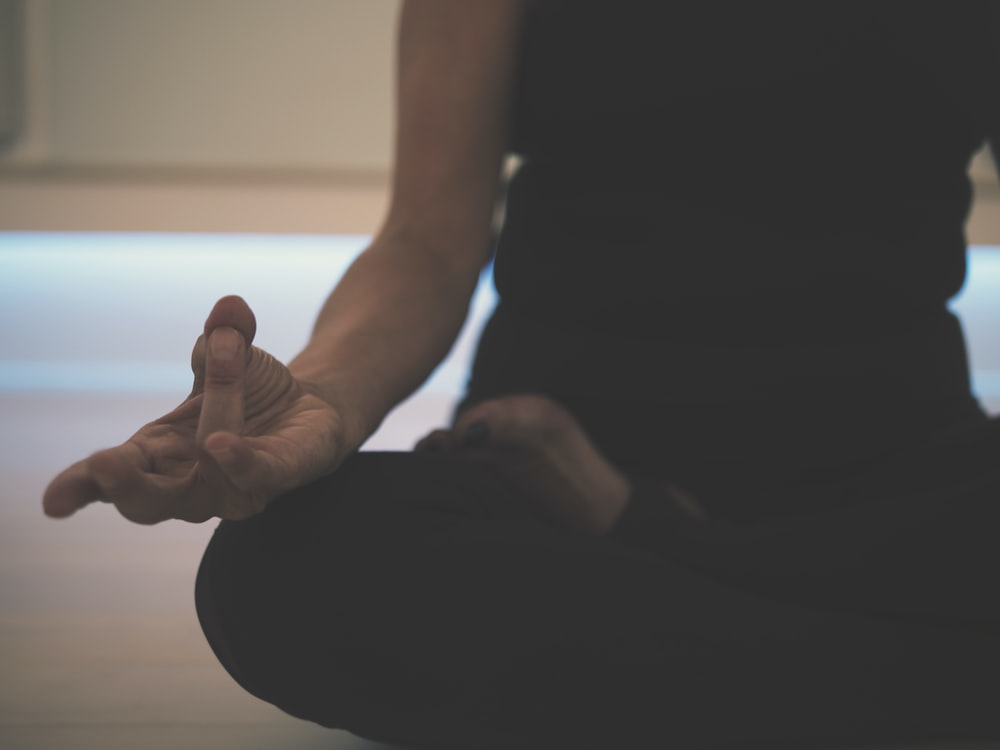 On the second day of the workshop, I came out of a particular meditation, and I was in excruciating pain, and incredible disability. But in the meditation, I had found an equally extraordinary peace that wasn’t dependant on my physical wellbeing, it was just within me.

Q. How did you discover you wanted to teach yoga? How was that experience?

A. Someone approached me around the same time as the meditation weekend and told me about yoga teacher training and asked me to come along. I thought that was rather ridiculous, and I honestly thought they were mad. They had obviously missed that I was in an electric wheelchair.

They told me that it would be okay. I would be able to visualise the practices, and I would have a different experience that was no less valid. By the end of the day, I had decided to join.

I felt quite self-conscious and quite ridiculous turning up to the first module in an electric wheelchair in May of 2007.

But, I left that module in a better condition than I had been for months. I went home and visualised. The next week I had gone into the hospital for a surgery, and I came out of the surgery very unwell, MS-wise, because anaesthetic has an impact on me, and everyone around me was panicking. I wasn’t. I was visualising, and thought “wow, this is working”. I kept doing it to stop that panic. 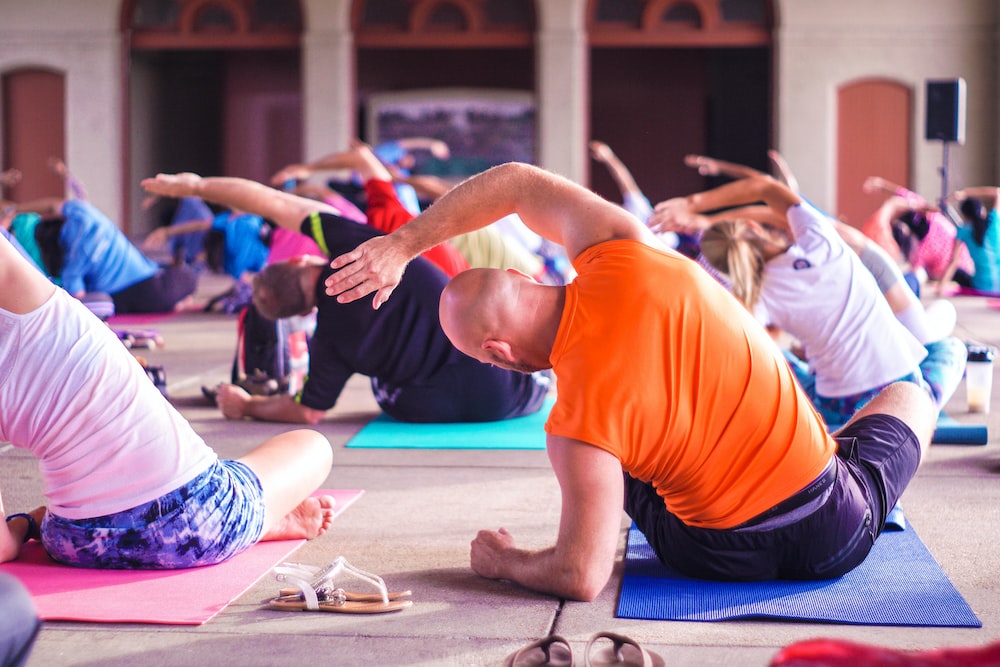 I had had mental health issues all my life, but doing yoga stopped the mental health issues. I never thought I would walk again, but it gave me a sense of peace inside my mind. And I continued practicing all the time. By the time I had returned for the next module three months later, I discovered that physically I could do what I had been imagining I could do, not very much, I could do tiny bits at a time, but my body had managed itself.

I went home and practiced with not only the new set of postures that we had learned, but also everyday tasks. Like chopping carrots, and using my wallet at a supermarket, which I had previously been unable to do. I had carers in the morning and afternoon most days to help run our family, and I suddenly discovered that I could start being a part of that care.

Nine months after I had started the yoga teacher training, I walked in without my electric wheelchair, and returned it.

Q. When and where did you start teaching?

A. I started teaching officially in 2011. To start off, I rang around all of the community services in Canberra, and by the end of this intensive process, I ended up with two of my longest running classes. One for women with post and anti-natal depression, and one for a Belconnen mental health class. Those classes ran for five or six years.

I’ve taught for YMCA, and that class was full, after starting out with one person. From there, I started expanding a bit, and I was doing quite a few classes around town, and also doing quite a few one-on-one yoga therapy sessions, for people with chronic health problems, who may not have necessarily been able to get out to a yoga class.

Q. Tell me a bit about the book you published, how does that make you feel?

A. I wrote my book through 2009 and 2010, and it was finally finished and published and released to the dru community at the end of 2010.

It was absolutely terrifying, because people felt like they knew me.

I have sold about 3,000 copies, which is pretty amazing. I had decided to stand up and say, “this is my journey”. I’m so grateful that it’s had such a positive impact on other people’s lives.

Q. What message is the most important for you to share?

A. At the end of the day, our physical and mental health is intermeshed. Our capacity to manage our lives in a healthy way is a result and consequence of our ability to manage our mental health. If we can find ways to manage it, and let the rest take care of itself, then it helps us to relax and relate to others in a positive way.

When I get sick, that’s the first thing I do, visualise and meditate. It’s my first port of call, but it’s not everybody’s. That’s been the most painful part of the journey, is going to see people who want to do what I did. I want people to do what they can and get from it what they can. I am not a miracle worker, and I can’t promise these results, but for people to do it for themselves, and find this journey for themselves, that is my ultimate goal for sharing my story.

Find what gives you peace. Find it and do it. All the time.

Best Pho in Canberra for Takeaway and Delivery

Diagnosed with Multiple Sclerosis at only 26: Q&A with Kane Pope

Our Law Students Need Support, But Where Can They Get It? A Q&A With the UC Law Society’s Wellbeing Officer

Q&A with Betty Kitchener AM